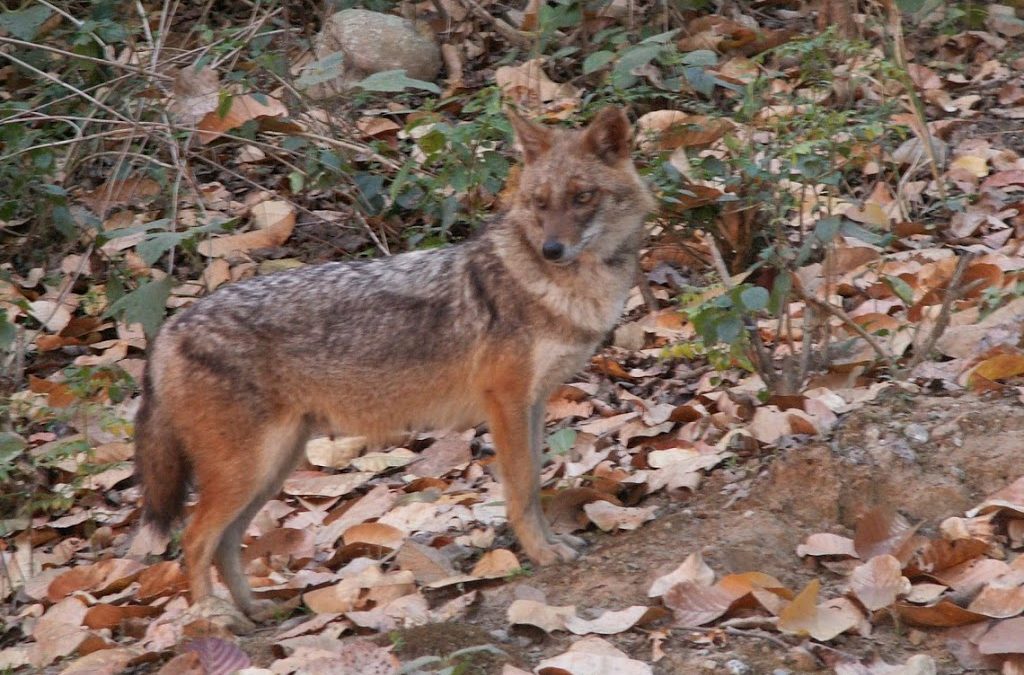 Depending on where you are, the breeze can bring to you the smell of the territory markings of a tiger, which urinates on specific trees, rocks and outcrops to warn off potential competitors. The strong smell of bovine urine can mean that there is or has been a Gaur (bison) herd in the vicinity. And depending on the forest, there is the smell of elephant. That is one smell you learn to recognize very early or you reach the point of no return. It is important to remember that animals can smell much more keenly than we can and so wearing after shave, perfume or even bathing with a perfumed soap can ensure that you never see a butterfly all day because animals smelt you a mile away and took another route. Same goes for tobacco, cigarettes, bidis and whatnot. I would bathe after my return from the forest in the night and go back the next morning without bathing. Sweat is natural and doesn’t drive animals away.
When you sit silently, you become a part of the surroundings. Your ears initially buzz with the residual sound of the bustle you have left behind. But after a while, they fall silent and then you begin to hear the sounds of the forest. The buzzing of cicadas, the incessant call of the Brain-fever bird, the distant barking of dogs from the village.
Then as your ears get more attuned to the sounds, you start hearing the subtler ones; the rustle of leaves as a rat snake makes his way from one shaded spot to another, the cooing of turtle doves, bark of the Chital sentry when she sees something alarming. You hear the breeze in the dry leaves on the forest floor as they play chase with each other.
Teak trees having shed most of their leaves, the dominant color is brown. There is very little shade, except under the Ber and Acacia thorn bushes like the one I am sitting in. There is some bamboo, but most of it is young and does not provide shade. There are no elephants in this forest, but Gaur (bison) browse on what they can reach of the bamboo and so do Chital, Sambar, and Nilgai.

As I sit very still, even controlling my breathing, knowing that above all else it is movement that attracts attention and becomes visible, I suddenly see a pair of jackals materialize in front of me. The bitch is more cautious and is lagging behind. The dog is ahead. Both sense that something is perhaps not as it should be. However, the wind is blowing steadily in my face and so I know they can’t smell me. The bitch even looks directly at me; perhaps she knows, maybe she can sense the rise and fall of my chest as I breathe or maybe it is an old memory she is trying to place. The moment passes and she follows her mate into the open. First, they drink, then they sit in the water on the edge and cool off in the intense heat of the day, then they start playing, chasing each other around like little puppies, secure in the knowledge that they are alone. It is a very rare moment for me, to be observing animals doing what they do when they are not afraid.
Even if I had a video camera, it could never capture the entire atmosphere; the excitement, the challenge of sitting silent and still like a tree stump, my outline broken by the bush I am sitting inside. The memory of those jackals is still so vivid in my mind that even today, more than 40 years later, I can see them playing in and around the water. Nothing lives that long in the wild. That pair of jackals is long gone. But I will remember them and that day, all my life.
After a while I realize that the jackals are a mixed blessing. Their presence will allay the fears of other animals heading to the water, as it is an indication that all is well. But at the same time their presence will keep the smaller game, Chinkara, Chowsinga, and Black-naped Hare away from the water hole. I want to make them leave but without alarming them so much that they warn everyone else of my presence. I gently clear my throat.
It is as if an electric shock goes through their bodies. One minute they are carefree playmates. The next instant they go rigid for a split second and then like a flash, they are gone, each in a different direction to confuse the pursuer. I settle once again into the ritual of watching life happen.
This enforced immobility and silence, the attendant boredom, initially; then the flow of thoughts in the mind, while trying to keep aware of the surroundings, is an incredibly powerful exercise for introspection. And waiting for and watching animals on a watering hole is the best way to do it.